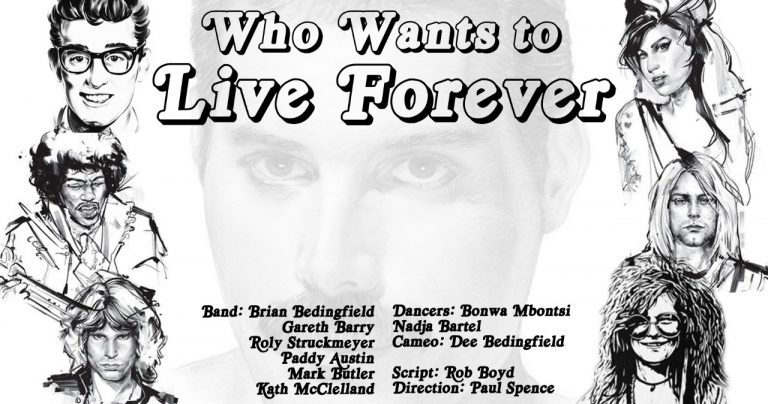 9pm: Who Wants To Live Forever

The team that brought you the richly textured Tom Waits 70’s retrospective “Heart of Saturday Night” in ’21 are back with their next big music show, “Who Wants to Live Forever”.

Expect more stunning dancing from dynamic duo Nadja Bartel and Bonwa Mbontsi, and grande dame Dee Bedingfield in a divine character cameo. With script by Rob Boyd, and Paul Spence on show direction, this MiTH headline on July 27th is a tantalizing, mouth-watering taster of the fantastic rock show comin’ down the pipeline.

Erin Fourie returns to the MiTH stage, joined by special guest Alan Strang in the later half of the set.

Erin has been on the Midlands music circuit for almost 20 years and regularly performs around Hilton and Howick in her acoustic folk style which has been likened to Joan Baez, among others. She has performed in numerous cabarets at the Hexagon Dive, was a top 10 SA Idols contestant and even managed to snag a role in The Sound of Music at the Durban Playhouse. In recent years she has collaborated with several local musicians on various projects and is delighted to showcase her current work with Alan Strang.

Alan has had a strong interest in music throughout his life, particularly in the areas of Scottish and Irish traditional music and folk music. A self-described “late starter” on the music scene, he became actively involved in the Buskers & TJs Acoustic Music clubs in Johannesburg. Principally a singer, Alan also plays guitar and enjoys creating harmonies with other musicians. In collaborations such as Almost Harmonic and PentUp, he performed at music festivals in the 90s, including Splashy Fen, Four Winds in PE, and Barleycorn in Cape Town. He has recorded and performed often with the Waldorf String Band, latterly becoming a regular member of the band.

Rosie is a 26 year old singer, songwriter, and pianist, born and raised in the Midlands of Kwa-Zulu Natal. She began piano at the age of 7 and has been composing her own pieces since the age of 12. She identifies as a contemporary folk artist whose work has been influenced by artists like Nora Jones, and Celtic Women. She also enjoys putting music to poems like Robert Frost’s “Stopping by woods on a snowy evening”.

KNOW BEFORE YOU GO: MiTH takes place every second Wednesday at The Knoll Historic Guest Farm, Knoll Drive, Hilton. Doors open at 6pm and the music will kick off at 7pm. Entrance is R50 at the door. Bring your own booze. Food and soft drinks are available for sale.