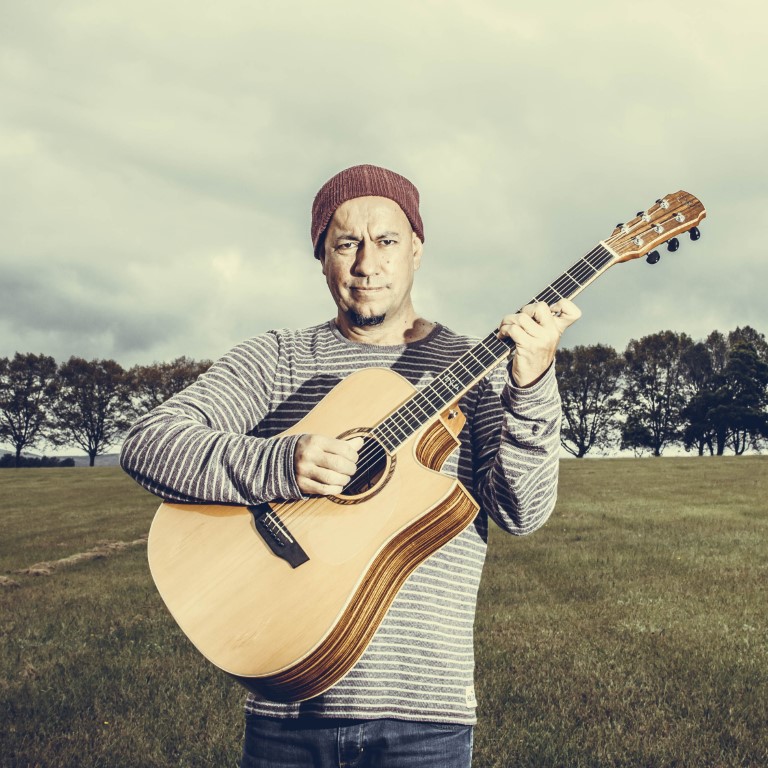 Nibs van der Spuy is one of the most extraordinary and exciting world acoustic guitarists and exports to come out of South Africa. Raised in the fertile province of Kwa-Zulu Natal, Nibs immersed himself in his natural environment to formulate a truly consummate and original sound. Growing up with the Beatles, and learning first-hand from traditional Zulu Maskandi guitarists, he quickly soaked up a rich tapestry of his close surroundings and beyond. After playing the local folk scene around South Africa for years, and gathering up a loyal following, his big stage break came after supporting Crosby, Stills and Nash on their 1996 South African tour. After that he was signed to the SHEER (South African World Music label) where he has released over 10 albums.

His third solo release, ‘Beautiful Feet’ received highly acclaimed accolades around the world where it was album of the month in four German publications, and Radio France FIP pick of the week. Nibs continues to spread his musical beauty around the world where he has shared stages with the likes of Ben Harper, Bonnie Raitt, Taj Mahal, Gito Baloi, Kelly Joe Phelps, Piers Faccini, Phillip Henry, Hannah Martin and Shawn Phillips. He recorded the critically acclaimed, ‘In the shade of the wild fig’, with long-time friend and collaborator, Guy Buttery.

Nibs will release his first solo album in seven years, ‘Maiden of the river’ in May 2022. The new material was written along the Lisbon coast during the global lockdowns.

Pretty is witty, mischievous, unwavering, and a free-spirited soul. She is a social entrepreneur, brand manager, poet, and vocalist. Raised in iMbali, Pietermaritzburg, by a force of strong women in the forefront, she has always been an explorer.

Combining her love for music, and her first love, poetry, she goes by the name Pretty & The Music. She is accompanied by Undivided Roots, with Wadada Cele on lead guitar, Judgement Cele on bass, Spear Nene on drums and Kingdom Cele on keyboard. Their eclectic sound zig-zags across a number of genres including African rhythm, soul, jazz, ancestral sounds, reggae, and rhythm and blues, all with an undertone of poetry. They have performed all over Kwa-Zulu Natal at cultural gatherings, corporate events, jam sessions, festivals, initiatives, and tourism and community development events. Pretty and The Music has performed in many venues in South Africa, including Credo Mutwa Village in Soweto, MiTH, Tatham Art Gallery, Punoza Boutique Hotel, The Playhouse, Cool Runnings, La Casa, Bob Marley Festival, and a Peter Tosh event, to name but a few.

In 2015, she founded an arts initiative called Kwasuka Sukela (which means “once-upon-a-time”) which delivers tales through their varied art forms. They continuously use art as a weapon in uplifting local talent, fighting social injustices, and empowering the community.

A novice in the music industry, 17-year-old Bradley de Klerk is a local musician based in Howick. His involvement in numerous musical theatre performances as well as a variety of musical ensembles at Michaelhouse has equipped him with the skills to start solo performing. Bradley is mainly self-taught and brings a unique sound to the songs that he performs.

KNOW BEFORE YOU GO: MiTH takes place every second Wednesday at The Knoll Historic Guest Farm, Knoll Drive, Hilton. Doors open at 6pm and the music will kick off at 7pm. Entrance is R50 at the door. Bring your own booze. Food and soft drinks are available for sale.